Increase light levels AND drive down energy consumption? Too much to ask, surely? Dextra Lighting’s latest sports hall design using the ultra-efficient dimmable Prosport LED did exactly that, reducing energy use for Cardiff University by approximately 60% compared with the previous fluorescent and HID system whilst significantly improving illuminance levels.

In recent years, Cardiff University has consolidated its position as one of the top 20 sporting institutions in the UK. It has maintained this reputation by continually investing in its facilities and teaching staff; finding sustainable ways to improve the student experience.

One of the most effective measures adopted by the educational sector to sustainably upgrade its facilities, is converting to LED. The change has proven highly popular because it is simple and offers incredibly fast returns on investment. Energy-efficient lighting upgrades such as this are also favoured by a number of funding programmes such as Salix Finance, which allow establishments to repay improvement loans through the resulting energy savings made.

Despite many of today’s clients being well-versed in listing LED’s energy-efficiency benefits, they are often unaware of the potential LED has in terms of performance, and the dramatic improvement it can bring to the lighting conditions of its facilities. This was certainly the case this February, when Maintenance Engineer, Keith Sims and Electrical Maintenance Officer, Paul Dobson of Cardiff University approached Dextra Lighting, amongst other competitors, to offer a design proposal for the university’s sports hall, focusing on both improving illumination levels and reducing energy consumption.

Dextra Lighting took on the challenge of improving lighting performance while simultaneously cutting running costs and carbon emissions of the university.

As with most sports halls, Field Hall caters for a variety of sporting activities. The facilities are used for the development of future athletes by supporting 60 different clubs at recreational and elite level and is hired out to generate extra income for the university.

Field Hall features cricket nets and is divided in courts for badminton, netball, basketball and football. Each area required sport-specific lux levels and uniformity ratios to be met to improve player experience and safety.

DALI compatible dimmable luminaires were specified to work with pre-ordered DALI LiGO and Trend BeMS systems, giving staff the flexibility to switch to different lighting presets remotely, whilst separating the hall into distinct zones for each sport. This would also allow multiple sports to be played at once with appropriate light levels.

Upon the initial survey, the Dextra Lighting team identified illumination levels not to current standards in each designated area and excessive energy use from aged type of fittings and control gear. The existing 400w HID high bays used as primary

lighting were producing an average of 240lux and were consuming a total of 27,720 watts approximately. Above the cricket nets, the previous 2 x 70w fluorescent battens were illuminating to 550lux, almost half the recommended current level, with a power load amounting to 13,352 watts. Although relamping or switching to up-to-date fluorescent alternatives may have achieved acceptable levels of illuminance, Dextra Lighting’s team were confident that a well-designed installation, using precision-engineered LED products, could deliver higher light levels with improved energy-efficiency and reduced maintenance costs.


Compliance with IET and BS 5266 safety regulations was required for all luminaires selected for the design.

The Prosport LED is fast becoming the luminaire of choice for many newly built and refurbished sports complexes nationwide. With its high-quality, LM80-verified Lumileds 3535 LEDs with 90% lumen maintenance and efficient optic design, this luminaire offers greater or similar output to fluorescent or HID equivalents at significantly lower energy and maintenance costs.

The versatile luminaire is available in a range of distributions and ECA compliant lumen outputs as high as 30,601 luminaire lumens, ensuring the correct lux levels, uniformity ratio and glare control are achieved to fully support each sporting activity. Attention to these factors during the design process ensures maximum visibility of fast moving objects in the field of play to increase safety and enhance player experience.

Its robust IK10-rated steel housing and polycarbonate ends caps offer suitable protection from ball strikes, and unlike fluorescent or HID luminaires, its LED source eliminates the risk of shattered lamps. This durable construction combined with the long life and low-maintenance benefits of its reliable Lumileds LED source, make the Prosport LED a hassle-free and sustainable solution for high-level sports applications.

For the large main hall area combining netball, badminton and football courts, the Prosport LED was supplied in the higher 30,601llm version which offers similar output to 4 x 80w T5 fluorescent equivalents with LORs of 80%, while operating at an outstanding efficiency of 140 luminaire-lumens-per-watt. Despite the considerable reduction in electrical load, the luminaires increased the light levels to 724lux at 0.55 uniformity wall to wall but with each badminton court lit to 727lux at 0.91 uniformity. Light levels in the netball court were increased to 819lux at a uniformity ratio consistent with the rest of the hall.

To achieve this high level of light quality and brightness across the entire hall, a versatile symmetrical optic was provided offering ideal distributions for a wide range of sports including netball, football and basketball. For badminton or tennis court applications, an angled asymmetrical version is also available offering even coverage with minimal glare for player safety and comfort.

A lower 24,000lm version, 21,288 Llm/w was used for the cricket area, configured using closer luminaire spacings to boost the light intensity without incurring high levels of hazardous glare whilst boasting an impressive 137llm efficiency. Illuminance levels in the cricket run-up area were increased to 1300lux at maximum setting to give players maximum visibility of fast moving balls and accurately monitor player movements, for a safer and more enjoyable sporting experience. Luminaries were also provided in a “cool white” 4000k colour temperature for increased comfort during play.

From a range of dimming options, the luminaire was provided with DALI dimming drivers to offer compatibility with the existing DALI LiGo and Trend BeMS systems. The installation will now be commissioned from a digital interface located at the hall’s doorway, and offers various presets to suit each sport whilst splitting the hall into three distinct activity zones, and also allows for separate controls for the cricket run-up area. For further energy savings the Prosport LED can be supplied with compatible standalone sensors from Dexsor’s Reacta range for daylight and presence detection.

To cut the costs of installation, the Prosport was provided with a zintec spine to simplify mounting at inconveniently high ceilings and was prewired to the required specifications.

Overall, Dextra Lighting’s design using different versions of the Prosport LED cut the total power load from 41,072w to as low 17,164w. The resulting 23,908w reduction is proportional to the 58% (maximum) increase in lux levels achieved in this project. To add to these incredible energy savings, maintenance costs will be greatly reduced as the Prosport’s reliable Lumileds LED sources, frequent lamp changes are no longer required to maintain the light output required over time. The University can now look forward to running its improved facilities in a greener, more cost-effective whilst offering optimal lighting conditions for its competitive sports programs.

* light meter readings taken during survey do not reflect the existing lighting’s performance when first installed, working at full capacity with no accumulated lumen depreciation. 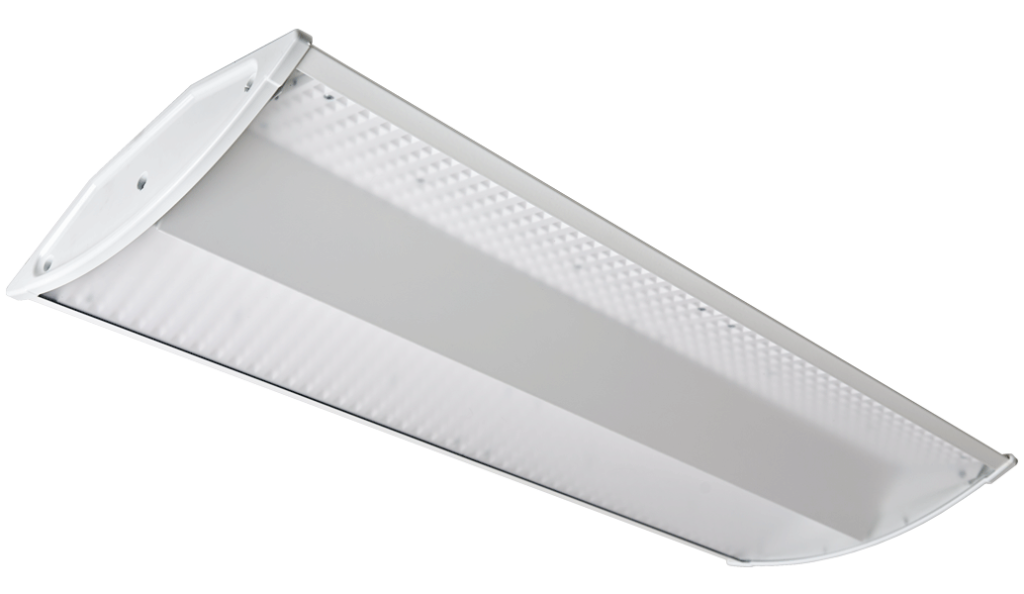