Retail lighting and its impact on consumers’ shopping habits has been in the spotlight in two retail studies.

The research was developed arising from numerous factors, among them the extremely competitive high street environment, where retailers feel obligated to attract potential consumers by illuminating their stores with a host of eye-catching display lighting and colour.

This not only creates bright and striking shop displays, but can also lead to retailers coming under scrutiny for high energy bills and being accused of not conducting themselves in an environmentally friendly way.

With competition between neighbouring retailers so fierce and the evident increase in illumination and heat output within stores, head of the Lighting Laboratory at Sweden’s Royal Institute of Technology, Professor Jan Ejhed oversaw the first study.

Exploring the extent to which lighting influences consumers’ individual preferences, the first study involved 97 people, who were requested to draw comparisons and assessments between three individual virtual reality lighting situations in shops and retail environments, the shop window, the store and shelving displays.

The research revealed the significance of colour temperature within retail environments. Although brightness was found to be an important factor for consumers, other factors, like colour temperature and rendering were just as important. The results also showed consumers’ preference of warm lighting and moderate brightness.

The research also found participants preferred brighter lighting within shop windows, with vertical rather than horizontal lighting helping products stand out from the background more effectively.

Participants were found to be more sensitive to colour rendering when they entered the shop. The study also revealed that varying lighting was also appealing, such as altering the colour according to the time of day or when a particular product was being promoted.

Conclusions drawn from the study highlight the influence of colour temperature, with the potential for different colour temperatures and brightness levels to attract consumers to specific products and successfully direct them to certain parts of the store.

The second study monitored people’s reactions when they were presented with different lighting schemes. The study was developed by Hamburg University of Applied Sciences and used eye-tracking technology to monitor where participants looked when being presented with real-life retail lighting schemes within two stores.

The study revealed people’s eyes were naturally drawn to areas of contrast, rather than the most brightly lit areas and were attracted to areas of blue lights more than any other colour.

The two studies revealed the significance and importance of effective accent lighting, showing that targeted lighting to highlight products on lower level shelves results in customers browsing for longer periods and may lead to an increase in sales. It also showed the consumers’ preference of a combination of both accent lighting and natural daylight within shop windows.

Dexretail’s high performing range of luminaires can be used to successfully highlight perimeters and wall displays, adding shade and texture to general lighting and making the retail environment more appealing to potential consumers. 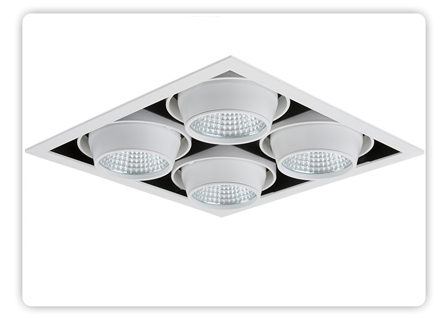 Products such as the Gyro-Light achieve striking accent lighting and highlight product displays effectively. The product offers a bespoke option through its recessed gimbal luminaires which can be supplied either individually or clustered, with each head capable of either pivoting or rotating to highlight specific areas. This feature ensures displays are highlighted consistently. The Gyro-Light also boasts robust black powder coated steel housing and high quality die-cast aluminium heads, as well as colour temperatures of 3000k or 4000k. With the significance of colour temperature being explored in European studies, the Gyro-Light allows retailers the ability to tailor-make their lighting to complement their space and the desired behaviour of their customers.

Attention Equivalent: A Study on the Effectiveness of Individual Lighting Parameters on the Perception and Preference of Customers in a Shop