Building a sustainable future –
The case for LED lighting for
the industrial sector.

Building a sustainable future –
The case for LED lighting for
the industrial sector.

In 2016, the Department for Business, Energy and Industrial Strategy reported that the industrial sector accounts for approximately 17% of the UK’s total energy consumption. The figure has halved since the 1980s, ranking it below both domestic users and the service sector.

Congratulations to Resourceable and Pritchitts for winning the 2017 Lux Award for Industrial and Transport Lighting Project of the Year.

At first sight, this may simply appear as an encouragingly positive development towards a low carbon economy. However, this downward trend conceals the challenges faced by companies today, as energy prices are at an all-time high and still rising, whilst eco-legislation is becoming ever more stringent. The decrease in energy is also owed to the fact that economic share of the industrial sector has significantly reduced since the 1970s as the UK shifted to a predominantly tertiary economy.

The reality is that although the technological advancements and new processes of the last 50 years have allowed industry to be more energy-efficient, companies are now ever more reliant on electricity and gas than other fuels for power. By 2014, electricity and gas combined, amounted to 67% of industrial energy, compared to 13% in 1970 and 56% in 1990, and with wholesale prices of electricity and gas on a constant rise for decades, companies have continued to struggle to keep their overheads low and maintain stable profit margins. Between 2004 and 2016, prices for non-domestic consumers have roughly doubled for very small consumers and tripled for larger entities. Add carbon reduction premiums such as the Climate Change Levy (CCL) to the equation, and the costs just keep piling up.

With electricity playing a larger role in powering industrial operations, companies have been investing in energy-efficient technology such as LED lighting and sensor controls, to minimise their energy costs and carbon emissions. Although at first, the initial cost of purchasing LED lighting appeared restrictive, soon its long-life, low-maintenance and energy-saving properties spoke for themselves, making LED the most financially and environmentally sustainable lighting solution available for industrial applications. Due to the intensive nature of such environments, LED technology had to evolve to meet the performance demands of this sector, which is why early on, customers were yet to be convinced of LED’s effectiveness. Soon however, LED products rapidly began to match, and eventually outperform HID or fluorescent equivalents, as persistent technological developments led to the broadening of LED’s functionality and a notable increase in reliability.

LED luminaires now offer the same if not improved performance of HID or fluorescent equivalents whilst consuming in the region of 70% less energy with the added advantage of eliminating the maintenance costs of frequent lamp replacements. With the addition of sensor controls, this figure can also be raised substantially. LED therefore, fits perfectly into the industrial model, which is to be as cost-effective, efficient and as eco-friendly as possible.

Key to the success of the re-lighting program at Pritchitts was getting the support of senior management and the operational staff on site who were used to a constant yellow glow of old sodium lighting. Phil Hunter, the onsite engineer, involved all the key staff members in a discussion about the possibility of introducing new lighting which would make the working conditions better and reduce overheads. Along with Sean O’Kane of Resourceable, lighting samples from Dexeco were demonstrated in the engineer’s office samples and a programmer were left for everyone to get familiar with them. At the same time senior staff were made aware of the grant scheme running in N. Ireland, a scheme which is available to qualifying energy projects and provides a sum of 20% of the product value. This dual track approach lead to getting the ‘okay’ for a small area lighting upgrade.

The first area upgraded was an area where high temperatures and high humidity prevailed. Resourceable carried out the designs and supply of products, whilst Pritchitts fed-back suggested improvements from their knowledge of the operational demands on site. Savings worked out at 84% due to DALI dimming via a remote programmer, lighting in the area was considered improved and the sensors kept the lights off in the daylight, reducing further the energy costs of the new lighting. For safety some lights were clamped at 10% minimum output.

With expected savings of 81%, funding was secured, producing a resultant payback period of 18months. ECA compliant fittings will also enable Pritchitts to claim ECAs on the project.

The electrical load has been reduced enabling some distribution boards to be replaced with smaller units. The insurance company has been involved and has commended the Health & Safety improvements. A new sample store and chill room both benefitted from the high lux output but low running costs and cool running temperature of the new lighting.

A customer more used to the yellow glow of sodium lighting is now fully behind the led lighting upgrade and enjoying the multiple benefits and huge savings, thanks to the forward-thinking of the Pritchitts operations team.

Products were supplied by Dexeco Ltd., a wholly owned subsidiary of Dextra Group plc. Dexeco offer a versatile product range using the latest technologies, allowing them to create unique and bespoke solutions suitable for any number of applications. Their in house designed and manufactured range of sensors are engineered to work exclusively with their lighting products. Every product they build incorporates bespoke sensor technology and is designed with specific applications in mind, enabling maximum energy savings from any given environment.

A combination of Dexeco’s Eco Impervia LED, Verteco LED and ProIP luminaires, all with sensors, were installed in the warehouse at Pritchitt Foods.

In order to maximise your savings and return on investment these luminaires can be offered with integral microwave sensor or diffuser mounted passive infra-red presence and daylight regulation sensor. The diffuser mounted Reacta 44 brings the additional benefit of simple ground level remote control programming and additional functionality.

All products in the Eco Impervia range are ideally suited to application where protection from dust and water ingress is critical and where the client demands the benefits LED brings of excellent energy efficiency and minimal maintenance.

The Verteco range has provided Dexeco’s clients across the UK with the premium high level energy saving sensor controlled lighting solution for over 5 years. The Verteco has a proven history of excellent performance, simple installation, significant energy reduction and rapid return on investment.

Although commonly used in warehouses and storage facilities the Verteco LED is suitable for a wide range of industrial and manufacturing applications and food production areas. Whilst many luminaire manufacturers have focused on high power LED lighting solutions for high level LED luminaires the glare resulting from these designs can be problematic for forklift truck drivers and warehouse operatives. The Verteco LED uses an array of mid power chips behind high transmission diffusers to ensure that visual discomfort is minimised whilst maintaining excellent optical control and light output ratio.

The highly efficient LED lighting array uses the latest Philips chip powered by the Philips outdoor driver range. This combination provides a range of lumen outputs and our constant lumen output feature eliminating lumen depreciation of the source over the lifetime of the luminaire further reducing the need for maintenance. All Verteco LED luminaires are available with Dexeco’s bespoke Reacta 14 sensor combining presence detection, daylight regulation and remote control programming providing simple commissioning of luminaires and accurate control at heights of 4-18M. All Verteco luminaires are supplied with a 5 year warranty providing peace of mind that your installation will operate effectively above and beyond the payback period.

The ProIP offers a covered and sealed product where clients demand the combination of a sensor controlled, energy efficient, low maintenance luminaire with ease of cleaning and protection against dust and water ingress. The ProIP is available in both IP20 variants, where a covered luminaire is required for ease of cleaning, and IP65 variants where complete protection is required from dust and water.

With a range of integral sensor options and highly efficient Lumileds LEDs and drivers the ProIP offers excellent return on investment in a range of arduous applications such as food production and manufacturing. The ProIP is also offered with Dexeco’s constant lumen output function which gradually increases the power output of the driver over its lifetime, offsetting lumen depreciation and ensuring that schemes can be calculated with minimal maintenance factors.

With two sensor options, the R11 sensor offering presence and the R44 sensor offering both presence detection and daylight regulation, wide and narrow detection patterns and mounting heights of 2.5m to 16m depending on the sensor type, the ProIP can be tailored to ensure the most effective solution possible for your project. With an integral sensor in each luminaire there is no need to modify external wiring allowing for rapid and low cost installation.

All sensor options in the ProIP range are compatible with the Dexeco REA-AP controller offering simple ground level programming allowing for quick and simple reconfiguration of sensors when required. 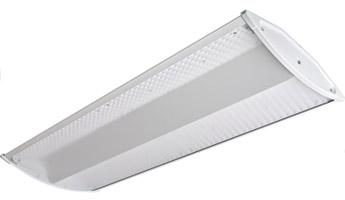