All LEDs used in Dextra Luminaires are tested in accordance with the LM80-08 standard and LED lifetimes are predicted using the TM-21 standard. TM-21 only permits meaningful prediction of lifetime to six times the test period undertaken in LM80 testing of the LED. Dextra Group has LM80 data to 10,000 operating hours therefore allowing LED lifetime to be predicted to 60,000 operating hours.

Measurements of ambient temperature, junction temperature and running current are undertaken on LEDs within luminaires to ensure that they are comparable to the test criteria used during the LM80 test allowing the individual LED tests to be compared meaningfully to luminaire lifetime performance, hence LM79 testing of complete luminaires is generally not undertaken. It is however important to note that other factors can effect luminaire performance and lifetime including driver lifetime, degradation of optical materials and dirt accumulation.

LM80
The testing undertaken by the LED manufacture on the LEDs at defined temperatures and operating currents. Over
the course of the test periodic measurements are taken to determine the rate of lumen depreciation. LM80 tests must be undertaken for a minimum of 6,000 operating hours however are often undertaken for greater periods of time to allow longer lifetime predictions to be generated.

TM21
The standard used to predict lifetime based on the data obtained from the LM80 test. TM21 may not be used to
extrapolate more than six times the test hours undertaken during LM80 testing.

L, B and C Values
L Value: The amount of lumen depreciation predicted over the lifetime of the LED stated as a percentage of initial lumens.

B Value: The percentage of LEDs that are predicted to exceed the stated lumen depreciation.

C Value: A complete failure of the LED, these are extremely uncommon and therefore not included in lifetime predictions.

Example:
L90 / B50 (60K) would predict that the LED will maintain 90% of its initial lumen output, 50% of the LEDs may exceed the predicted lumen depreciation, over an operating period of 60,000 hours.

For this statement to be valid a minimum of 10,000 hours of LM80 LED test data is required. 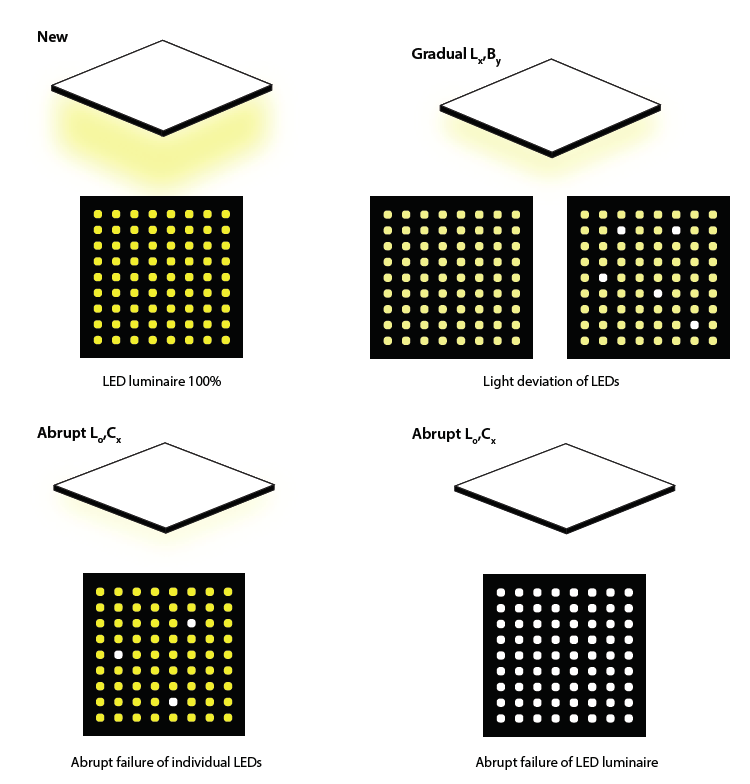