LED lighting creates energy savings of up to 77% for local service station.

Wincanton based, Anchor Hill garage has invested in a state-of-the-art LED lighting system as part of an all-inclusive refurbishment project. The extensive upgrade has refreshed the entire site and now performs at the highest levels of energy efficiency, whilst meeting the today’s standards of quality and longevity.

After a preliminary discussion about the project’s details on-site with Anchor Hill’s procurement staff, the premises were surveyed by the Dexeco team, to determine the appropriate illuminance levels and luminaire positions for the internal shop area. Upon a second visit, the client decided to scale-up the project to include the garage’s forecourt. Since petrol station forecourts often operate around the clock, this required various surveys to be carried out at night to obtain the average illuminance levels for the surrounding area.

Once the necessary data was collected, Dextra’s design department proposed a bespoke solution centred around two key products: the MODLED Slim, for the station’s interior and the new Kanopy luminaire to light the filling and car display areas

underneath and nearby the canopy.

In the shop area, the brief involved replacing the existing 4 x 18W Cat 2 louvre luminaries, which were producing an opaque and uneven light, with LED alternatives that would achieve optimal lux levels and minimise both energy and maintenance costs. Ideal for retrofit applications, the 3500 lumen MODLED Slim recessed luminaire reduced the lighting load by approximately 64% from an estimated 730W down to 268W, whilst adhering to the existing luminaire spacings. The installation also provided additional focus in key areas such as product displays and counters; producing a balanced and comfortable distribution of light. Such levels of efficiency are owed to the luminaire’s high transmission panels, which offer 93% transmission and superb light diffusion.

When its efficient optical design is paired with the use of high quality Lumileds LEDs, the MODLED Slim reaches LORs of up to 85%, providing excellent vertical illuminance.

Although the MODLED Slim was used in its lowest lumen package, the luminaire is also available in outputs as high as 9000lm across three different body sizes (600mm x 600mm; 1200mm x 300mm, 1200mm x 600mm). These options allow for increased flexibility to design the most efficient solution for the application. Furthermore, the 3500lm complies with BSEN 12464 3000 candela glare requirements, ensuring visual comfort for staff and customers in addition to being suitable for applications with monitors in use.

Unlike other luminaires in the MODLED family, the MODLED Slim is a compact solution designed for lay-in installation in 15mm and 24mm exposed T suspended ceiling systems. Its attractively designed white powder painted steel housing, offers a contemporary and minimalist look suitable for a variety of interiors. Finally, the MODLED Slim is compatible with HFR, DALI, Switch and DSI dimming functions in all available lumen outputs and can be supplied with integral three hour emergency lighting to suit a range of applications.

Lighting in the service station’s forecourt was also replaced on a one-to-one basis. Here, an optimal illuminance level of 200lux was to be achieved whilst maximising energy efficiency throughout the working day. External lighting in petrol stations can be extremely costly as filling areas need to remain constantly lit often during hours of darkness when customer visits are infrequent. Therefore, the canopy needs to be lit effectively during these hours to avoid deterring potential customers. Dexeco’s Kanopy luminaire provides a simple, yet effective solution to this common problem.

The Kanopy is specifically designed to be installed in canopies and petrol station forecourts. With a selection of lumen outputs (8700lm and 12,000lm)

and beam angles, the luminaire allows one-for-one installation in a range of heights and layouts with minimal modifications to the wiring or canopy itself. The luminaire can also be supplied in custom trim sizes to suit the existing apertures of the canopy, avoiding any further expenses during installation.

With two sensor options, the R11 sensor for presence detection and the R44 sensor for both presence detection and daylight regulation, the Kanopy can be programmed to dim back to lower output during periods of absence and adapt to surrounding levels of daylight, ensuring that the canopy remains appropriately lit whilst providing huge energy savings throughout the day. Both these sensor types are programmable from the ground level via Dexeco’s user-friendly REA-AP remote controller, which will allow staff a range of customisable settings.

In the station’s forecourt, the Kanopy achieved the required 200lux light level with a 77% decrease in energy consumption (274W down to 64W) compared to the previous fluorescent lighting. This outstanding performance is the result of its internal Miro 851 reflector and/or injection moulded optical cover (8,700 lumen version only) for maximum optical efficiency, which when combined with industry

standard Lumileds LEDs and drivers, allow the luminaire to offer an impressive 87% LOR whilst operating at up to 125 luminaire lumens per circuit watt. To further enhance the inherent advantage of LED light sources for long life and low maintenance, the luminaire’s constant lumen output function also eliminates depreciation of the source over the product’s lifetime.

The Kanopy LED luminaire has guaranteed the local garage an extremely rapid return on investment through a combination of excellent efficiency, customisable sensors and dimming controls, low installation costs and minimal maintenance. Each of the LED products utilised in the project were also covered by Dextra’s comprehensive 5 year warranty for additional peace of mind upon investment.

The LED upgrade has not only made the service station more appealing to customers by offering a superior quality of light and contemporary look, but will continue to produce a long line of financial paybacks through massive reductions of energy costs. In terms of installation, the selected luminaires also offered a time and cost-effective one-for-one replacement of the previous lighting, creating further savings. Now reopened, the garage returns to business as usual; only better and brighter. 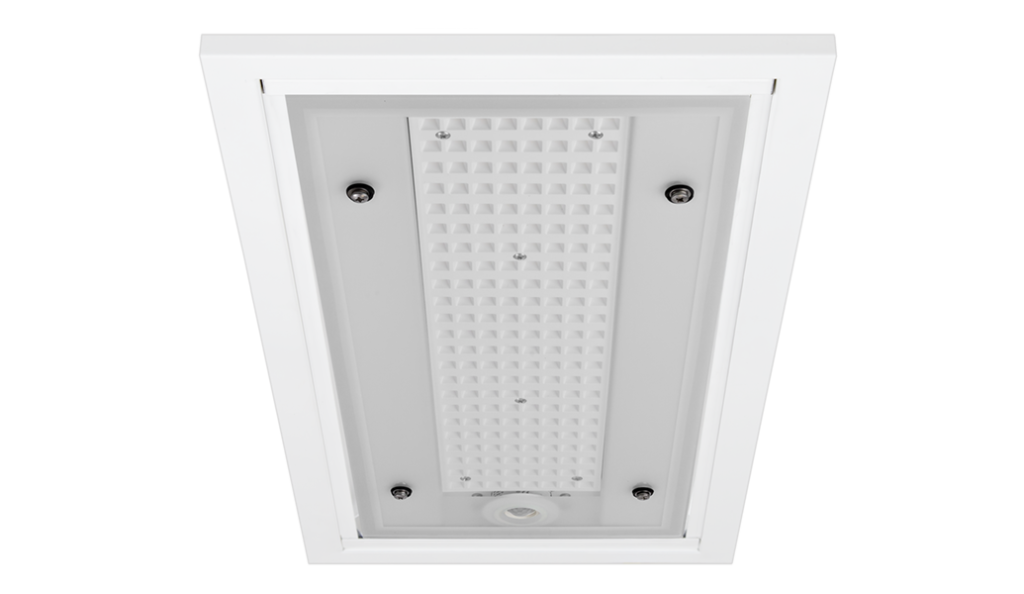